This theory not just now, i have been observing with this one and it’s vindicated.
For reference attaching, my predictions, and current stage of the tournament.
My Prediction for the tournament before & for Knock Out phases as on 30th June 2018. 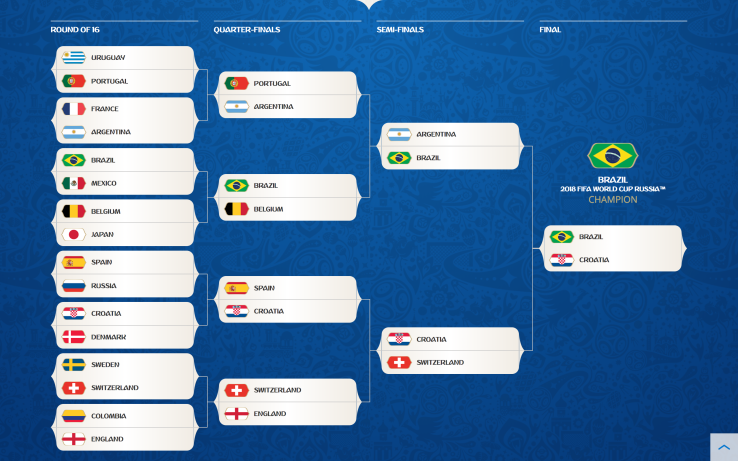 What gone bit reverse anti-pattern in my first part of Predictions:

For me it’s #BRAZIL(no problem so far). France vs Argentina #OMF! (add-on: I was hoping for a PORTUGAL-ARGENTINA one, as hope took over the intuition despite gut feeling otherwise.)
Intuition is not clear. Miracles happen & Expect the UnExpected with Drama. (this all I had stated when I first shared the predictions.)

Intuition is not clear. Miracles happen & Expect the UnExpected with Drama.
Detailed post of mine in the circles of social media WhatsApp groups was:
For me it’s #Brazil. Though no very clear intuition coming on the individual matches winers, France vs Argentina: Argentina may edge through against real mighty France for the recent gained confidence and combination, even it might be extra time or Penalty ShootOut. Similarly Denmark though is no Netherlands with their still Defensive oriented mindset/play style, Croatia will just find it
enough. If it goes to Penalty Shoot Out, Denmark might edge through though despite Croatia’s good striking accuracy. Argentina v Brazil for me in the SF1 & Brazill will prove its Super Power. And in the final, Croatia though has the really great chance, Brazil is Brazil. Brazil is still fragile and get o get their Team act and vive & mojo. Any team can be Check Mate and dark horse. & Miracles happen and Expect the UnExpected with quite some Drama. #FIFAWC2018Russia

So after observing initial part till Spain-Russia match, I augmented and improved my theory against VAR. Odds were vs ARGENTINA.

So this was my first model to train as per ML(Machine Learning) terminology. Sorry to connect with bit of AI/Technology. And the model is trained, evaluated, trained, transformed and so on. So is the life cycle.

Current Results in Knock Out Phase of Round of 16:
So this justifies and vindicates my theory and Algorithm.
(P.S.: I have not updated my Predictions Bracket View after initial 3 reversals. So it’s as is as I shared across at the outset.)
Updates to the Pattern Observations: 3July2018
1. So R or any letter of RUSSIA 1st occurrence after 3rd place gets nullified or really doesn’t matter. Alphabets take over.
Regards! Cheers!
– Prabeen Kumar Pati

Turn Square @ PSquare. Simply, the Unique Prabeen! Not just another blogger-bloggy on the web! View all posts by PSquare

This site uses Akismet to reduce spam. Learn how your comment data is processed.